The Wadden Sea primarily has the function of a World Heritage Site with sustainable economic joint use. This theme concerns the living (biotic) part of the ecosystem. 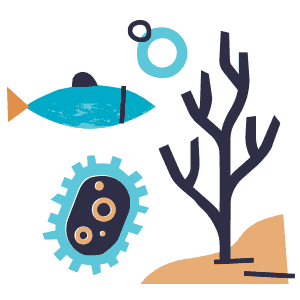 Broadly speaking, the existing management and policy with regard to this area is aimed at visible and appreciated natural values: those of uncovered mudflats and species such as birds, seals, shellfish and eelgrass. These are therefore the most important target species designated under Natura 2000. As a result, the improvements made in recent decades can be found mainly in this habitat type and these groups of species. The protection of life under water is still catching up.

Activities, particularly in the area of the ‘swimways’ of migratory fish, have increased and intensified the attention paid to the values of life under water. The important ecological role of shellfish banks has been recognised for some time and efforts are being made to improve their protection through fishing agreements. However, other aspects of life under water are still underexposed. This mainly concerns organisms such as algae, zooplankton, bacteria and species hidden in the sediment of channels: commercially less important shellfish, fish, rays and sharks. These form an important part of the foundation of the ecosystem and therefore also influence the success of species of which we are proud.

The above-mentioned fundamental but still largely unknown groups of species and their relationship with the better known and already protected groups of species (such as shellfish, birds, seals etc.) require further attention. Interactions with the physical (abiotic) part of the ecosystem also need to be better understood. Getting a better grip on the perspective for policy and management action is of paramount importance, also in a trilateral context.

Broadly speaking, the existing management and policy with regard to this area is aimed at visible and appreciated natural values. The protection of life under water is still catching up.