This theme concerns the physical, abiotic part of the ecosystem. The Wadden Sea is constantly changing and adapting to changes in the climate and human interventions from both the past and the present. 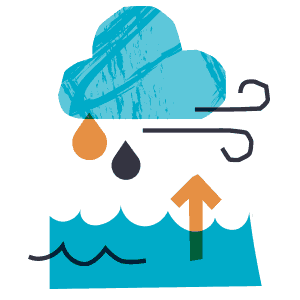 Climate change is likely to have far-reaching consequences for the Wadden Sea and the land around it.

Despite the current sea level rise (approximately 20 cm per century), the Wadden Sea has been getting shallower for almost a century. This process may continue in the coming decades. However, if the sea level rises too fast, uncovered mudflats will become submerged and flood defences will be jeopardised.

In addition, the seawater temperature will rise and the water will become increasingly acidic, which will probably have major consequences for the ecosystem.

Because of the increasing air temperature, there is a threat of land desiccation, especially in summer, resulting in increased salinisation and problems for agriculture.

As shown above, climate change has a multitude of effects throughout the Wadden Sea region: on ecology, water safety and human joint use. It is important to map out the most likely scenarios, choose the most important focus areas and then plan measures together with managers, policymakers, residents and users.

In the long term, climate change will play an even greater role in terms of ecology, water safety and shared human use, both in the Wadden Sea itself and in the surrounding region. As a first step, we will catalogue the most likely scenarios and key points for attention before scheduling the necessary measures, in consultation with all parties involved.