Allowing the sea in to keep it out

Amid the many heatwaves and freshwater shortages, one would almost forget another, longer-term problem associated with climate change: rising sea levels. Keeping the Netherlands safe will call for ever larger investments that require lengthy preparations.

Few people in the Wadden Sea region or elsewhere are aware just how strongly the required technology is rooted in local traditions. That technology dates from the early Middle Ages, and uses the precipitation of sludge from the sea to raise the land. This is how the salt marshes came into being, which gave us the ‘high lands’ of Friesland and Groningen, up in the north of the country. Where this process did not take place and dikes were built to keep the sea out, low-lying polders can be found that are far more vulnerable to rising seal levels than the higher lands.

And today, as sea levels continue to rise, the sea water keeps depositing sludge on the land – a gift from Poseidon. So why not use that sludge to further raise the land along the coast? In fact the Wadden Academy poses that very question in one of its recent publications: Weerbare Waddenkust (Resilient Coasts in the Wadden Sea Region). The report outlines a possible approach to this issue: building double-dike systems to allow the sea to flood the areas in between, in a controlled manner, and deposit sludge in the process. As the deposits accumulate, you can either let nature run its course or use the land to cultivate shellfish or sea vegetables.

Adapting to rising seal levels in the Wadden Sea region

Allowing the sea in may not seem the most logical thing to do if you want to keep it out. And indeed, obstacles can be expected during the process. The professionals involved – visionaries at the water boards, provinces, the Flooding Protection Programme (HWBP) and institutions – are aware of those obstacles, but still thought it worth while to give it a try. They chose the Dollard Bay coast for good reason. These waters contain large quantities of sludge, so they offer a dual benefit by allowing us to remove sludge from the bay and use it to raise the land.

The Dubbele Dijk project is a great example. Part of the dike system between Eemshaven and Delfzijl, the Dubbele Dijk (double dike) was built in close collaboration with the Noorderzijlvest water board, the Groningen provincial executive and the HWBP.

Elsewhere in the Dollard area, the Hunze & Aa’s water board launched a similar project. They dug off a small part of the salt marshes, allowed the sludge to ripen into clay and then used it for dike reinforcement purposes (creating a ‘wide green dike’). The excavation has been designed in such a way that the salt marsh will gradually silt up again, providing habitats for birds in the process.

Allowing the sea in once again…

In other areas along the Wadden Coast, too, the parties involved – administrators, managers, knowledge institutions and residents alike – are facing the challenge of defying logic and finding controlled ways to allow the sea in so as to strengthen our defences against it. We have little time to lose. As pointed out above, the preparations take a lot of time and sea levels will continue to rise unabated. 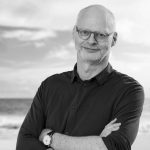