Since the early Middle Ages humans found, as around every estuary, on the banks of the Elbe a good place to live. The port of Hamburg developed into an import global harbor and the city expanded. The relationship between marine and estuarine nature and the urban environment changed in time. The tidal river system and the estuary are hydromorfological influenced by the demands of shipping and coastal protection. Nowadays parties are working on improving the nature quality, as much as possible. The Elbe introductions and site visits helps the community to get informed about the challenges and learn from some of the measures which are taken yet. 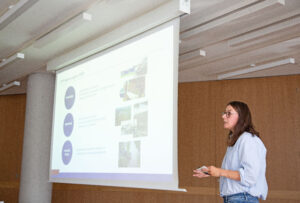 The Elbe originates in the Tjech Republic and flows after about 1000 km. into the North Sea at Cuxhaven. On average, the Elbe transports about 650.000 tons of suspended solids per year from the source to its mouth. During the ‘70th and 80th the Elbe was the most polluted river in central Europe. Despite the fact that much has been done against the pollution for decades and much has proven, there is still a lot of work to do. Sediment management, like dredging and tidal damping, has to take into account this presence of pollution. 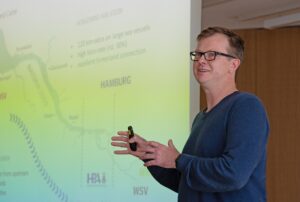 Mr. Dr. Heinrich Röper from Hamburg Port Authority (HPA) talks about sediment management of the Port of Hamburg and about the visit to the Kreetsand site.

The Tidal Elbe is the tide influenced part of the Elbe, from the weir in Geesthacht to its mouth at the North Sea. It’s the seaward access to the Port of Hamburg, the region’s economic driver. Since dyke construction began about 1000 years ago, man has changed the Tidal Elbe significantly. Man’s influence and natural developments have caused a significant change in the hydrological situation. The incoming tide is much stronger than de ebb tide these days, which is why sediments are increasingly transported upstream from the North Sea towards Hamburg. To ensure that large vessels can reach the Port of Hamburg, there have to be dredged. As part of the water-depth maintenance, approximately three to six billion cubic metres of Elbe sediment are handled every year.

Read more about this in the presentation Sediment management Port of Hamburg.

On Friday the 8th of October the Jadebusen-Weser region was on focus. The Jade Bight, in German, Jadebusen is about 180 km² in area, the Jade was largely created by storm floods during the 13th and 16th centuries. Since the early 14th century, it has joined eastward to the estuary of the river Weser. For some time, there were three permanent connecting branches and one flood bed between the river and the bight, forming an estuarine delta. The first of these junctions was closed in 1450 by dikes and the last one in 1515. However, about a century passed before most of the area flooded by these connections was regained for pasture and arable land. (Source Wikipedia.org). The Neuwapeler Außengroden are a good example of saltmarsh improvement in relationship with dike improvement. The Langwarder Groden shows what nature can do when the sea gets access again to reclaimed land. And the Luneplate on  the eastern bank of the Weser is a nature compensation and tidal damping project related to the (economical) demands of the Bremen Ports.

The Ems and the Ems-Dollard estuary is a shared German – Dutch challenge. Improvement programs are started at the German and the Dutch part, with al bilateral cooperation. At the German site of the border the Masterplan Ems is established.

On 9 october 2021 we visited three projects in the German Ems-Dollard region.